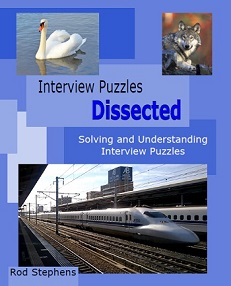 If you haven’t read it yet, read the Five hats puzzle.

Recall that the warden has three white hats and two black hats. If the first prisoner, Art, saw two black hats, then he would know that he had a white hat. Art says he doesn’t know his hat color, so the other two prisoners must be wearing either at least one white hat.

Now Carter knows that he must be wearing a white hat so he says that he knows his hat color. (He’s not called “Clever Carter” for nothing.)

My the book Interview Puzzles Dissected not only describes similar hats puzzles (and lots of other kinds of puzzles) and their solutions, but it also discusses extensions to the puzzles. For example:

This site uses Akismet to reduce spam. Learn how your comment data is processed.